Azumah Resources Limited is a Perth-based, ASX listed (ASX: AZM) company focused on exploring and developing its Wa Gold Project in the Upper West Region of Ghana, West Africa. It holds 2,400km² of licences that include >150km strike of prospective Birimian terrain, the rocks that host the majority of West Africa’s major gold mines. It has delineated 2.5Moz of Mineral Resources, defined an Ore Reserve of 1Moz and is presently focused on completing a Feasibility Study Q3 2019, making a development decision soon after and maintaining its intensive exploration campaigns directed at increasing resources and reserves.

Systematic exploration has identified three flagship deposits: Kunche, Bepkong and Julie plus several satellite deposits. An innovative funding deal with PE group, Ibaera Capital Fund, sees Azumah free-carried for two years and an expenditure of A$ 17M which will earn Ibaera a 47,5% direct interest in the Project. 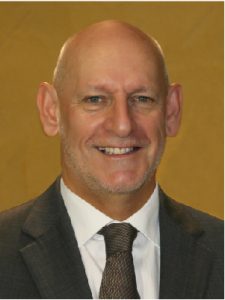 Mr Stone graduated with honours in Mining Geology from University of Wales, Cardiff and has since gained more than 30 years’ operating, project evaluation, executive management and corporate development experience in the international mining and exploration industry. After working for several years at the large open pit and underground copper mines of the Zambian Copperbelt, he came to Australia in 1986. He has been involved in the formation and management of several junior ASX listed exploration companies.
He joined Azumah as its Non-Executive Chairman in November 2006, was appointed its Executive Chairman in December 2007 and Managing Director in October 2009.

Stephen is also an executive director of ASX listed exploration company Castle Minerals Limited, a member if the Australia Institute of Mining and Metallurgy. A Fellow of the Australian Institute of Company Directors, and is a member of the editorial board of International Mining Magazine.