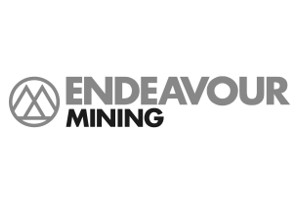 Endeavour Mining is a TSX listed intermediate African gold producer with a solid track record of operational excellence, project development and exploration in the highly prospective Birimian greenstone belt in West Africa. Endeavour is focused on offering both near-term and long-term growth opportunities with its project pipeline and its exploration strategy, while generating immediate cash flow from its operations.
Endeavour operates four mines across Côte d’Ivoire (Agbaou and Ity) and Burkina Faso (Houndé, Karma).

Martino De Ciccio is Vice President Strategy and Investor Relations at Endeavour Mining, a position he assumed in late 2015. Mr. De Ciccio has built a track-record of significant value creation in both bull and bear markets over the past 10 years in the mining industry. Prior to joining Endeavour, he held the position of Strategy and Business Development Manager at La Mancha Resources, where he played a pivotal role in growing the company from an emerging gold producer into a leading private gold fund. Mr. De Ciccio earned a B.Com in Finance from McGill University. He is a Chartered Financial Analyst and a member of the CFA Institute.

The key challenge for us is overcoming the perceived political risk in West Africa. But gradually, through site visits and regular communication from our sites, we are helping our investor community understand the region better and see the incredible progress we have made there, developing excellent relationships with governments and local communities. Each of the Company’s operations are continuing to manage and respond to coronavirus within the framework of the Company’s incident management and response plan. Endeavour has not witnessed any impact to production or operations at any of its mines or exploration activities.

We offer both near-term and long-term growth opportunities while generating immediate cash flow.

Endeavour adopts an active portfolio management approach to focus on high quality assets with an investment criteria based on capital allocation efficiency and return on capital employed. With its technical teams all based in proximity to its mines, Endeavour has built a solid track record of exploration, development and operation in the highly prospective Birimian greenstone belt.

Endeavour operates four mines across Côte d’Ivoire (Agbaou and Ity) and Burkina Faso (Houndé, Karma), which during FY2019 saw production of 651koz at an AISC of $818/oz, achieving guidance for the 7th consecutive year. Operating Cash Flow for FY2019 was up 20% over FY-2018 to $302m or $2.75/share. Its ongoing five-year exploration program aims to discover 10-15Moz of gold by 2021 which represents more than twice the reserve depletion during the period.

Endeavour’s high-quality development projects (recently commissioned Houndé, Ity CIL and Kalana) have the combined potential to deliver an additional 600koz per year at an AISC well below $700/oz – between 2018 and 2020.

During March 2020 Endeavour and SEMAFO Inc. (TSX, OMX: SMF) announced that they had entered into a definitive agreement whereby Endeavour will acquire all of the issued and outstanding securities of SEMAFO, which would create a top 15 global gold producer and the largest in West Africa, with six operations and an attractive growth pipeline. Pursuant to the Plan of Arrangement, SEMAFO common shares will be exchanged at a ratio of 0.1422 Endeavour ordinary shares for each one SEMAFO common share. The combined entity would benefit from four cornerstone mines, with combined production of over 800,000 ounces per year, and increased capital allocation efficiency due to its enhanced project and exploration pipeline.

Endeavour will also continue to benefit from having La Mancha as a cornerstone shareholder, which will invest $100 million into to the combined entity and hold a 25% interest on a pro-forma basis.