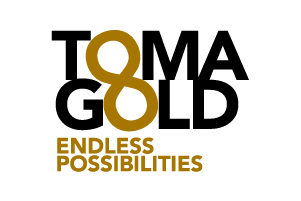 TomaGold Corporation is a Canadian mineral exploration corporation engaged in the acquisition, assessment, exploration and development of gold mineral properties.
The company has interests in five gold properties near the Chibougamau mining camp in northern Quebec: Obalski 100% Working Interest (WI) on 345 hectares, Monster Lake East 100% WI on 5,867 hectares, Monster Lake West 100% WI on 1,172 hectares, the Hazeur’s properties 70% WI on 2,975 hectares and Lac Doda 100% WI on 4,478 hectares. In Ontario, TomaGold participates in a joint venture and holds a 24.5% WI in the Baird property on 90 hectares, near Red Lake.
In March 2022, TomaGold released the results of the first three holes in phase 2 of its 11,500m drilling programme at its Obalski Project, which has intersected 5.06 g/t Au over 10.5m at a depth of 360m.
Earlier in February 2022, TomaGold acquired five more claims immediately west of Obalski, expanding the property to 2,724ha across 74 claims. The IP survey over approximately six line-km is now underway after completion of the drilling, and some nine line-km additional line-cutting have begun in February 2022.
HIGHLIGHTS:
CANADIAN GOLD EXPLORATION COMPANY
Chibougamau Mining Camp (Quebec)
Owns 100% of Obalski past producing Au-Ag-Cu project
Owns three projects adjacent to 433,500 oz Monster Lake deposit
Red Lake Mining Camp (Ontario)
Owns 24.5% of Baird JV with Evolution Mining and New Gold
SOLID TEAM AND STAKEHOLDERS
Experienced Management, Board and Advisory Committee
Solid technical team with three geologists/engineers
Major shareholders include IAMGOLD and Quebec funds
WELL-FUNDED COMPANY
Over $5 million in cash and short-term investments
Funds to be mainly allocated to the development of its projects located near known mining camps, which hold significant exploration potential

David Grondin – President & CEO
David Grondin has worked in the financial and mining sectors for over 20 years. He has been President and Chief Executive Officer of TomaGold since December 2011. He was President and Chief Executive Officer of NQ Exploration from October 2007 to May 2018 during the spin-off process that created Imperial Mining (TSXV: IPG) and AM Resources. He also acted as a financial analyst for CTI Capital Inc. from 1997 to 2000. Mr. Grondin has a bachelor’s degree in business administration (finance) from HEC Montréal and extensive experience in initial public offerings, mergers and acquisitions and reverse takeovers. .

We are looking for market support and get broader exposure to institutional investors.

Execute a large exploration and development program in Obalski and Monster Lake East.

Macro driven events are the main risks, we overcome these by being fully funded and owning a large and diversified asset portfolio.