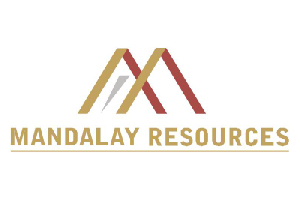 Mandalay Resources is a Canadian-based natural resource company with producing assets in Australia and Sweden. The Company is focused on growing production at its high-grade gold and antimony operation in Australia, and gold
production from its operation in Sweden to generate near-term cash flow. The Company is fully-funded with a strong balance sheet and positioned to return to profitability by the end of the year, and to double its production profile from 2019-2021.

Mr. Duffy holds a B.Eng in Mining Engineering from the University of New South Wales (Sydney, Australia). He has extensive technical and operational management experience, having worked at numerous operations throughout Australia and Latin America. Prior to joining Mandalay Resources, Mr. Duffy most recently worked for Coeur d’Alene Mines and Hecla Mining Company in South America.

The Company has recently completed a fundraising and has turned around its operations. Mandalay has a compelling combination of a significant production and cash flow growth profile along with extremely exciting exploration prospects at each site.

We would like to highlight the fact that we are bringing the high-grade Youle vein online in the second half of the year, which is approximately 18-19 grams per tonne of gold equivalent. Adding Youle to reserves has underpinned the Company’s growth forecasts in which we aim to grow from 81,000 ounces in 2018 to 162,000 ounces by the end of 2019. The Company recently completed a US$40 million financing and announced strong operating numbers from Q1 2019.

Begin drill programs at Bjorkdal (Sweden) and Costerfield (Australia). Exploration at Costerfield is to begin a three-year program in which it is investigating numerous similarities with the nearby Fosterville mine. We also aim to reach the high-grade Youle vein at Costerfield.

Ramp up production at both Youle and Bjorkdal

The number one priority for the Company is to develop, begin production, and ramp-up production at the Youle vein (Costerfield). We are proceeding well towards Youle.

Growth. Mandalay increasing production 2018-2021 while drastically reducing costs due to reaching a high-grade vein in the latter half of this year. Expected return to profitability by year-end.