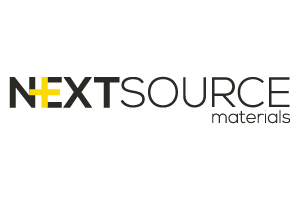 NextSource Materials Inc. is a strategic materials development company based in Toronto, Canada that is intent on becoming a fully integrated, global supplier of critical battery and technology materials needed to power the sustainable energy revolution.

The Company’s Molo graphite project in Madagascar is one of the largest known and highest-quality graphite deposits globally, and the only one with SuperFlake® graphite. Construction of Phase 1 of the Molo Project is underway, with the start of mining activities expected in November 2022, and completion of plant commissioning expected in early December 2022.

Craig Scherba, P. Geo., President and CEO
Mr. Scherba was appointed President and Chief Operating Officer in September 2012 and has been a director since January 2010. Previously, Mr. Scherba served as Vice President, Exploration of the Company since January 2010. Prior to joining the Company, Mr. Scherba was a managing partner for six years with Taiga Consultants Ltd. (“Taiga”), a mining exploration consulting company. Mr. Scherba has been a professional geologist (P. Geo.) since 2000, and his expertise includes supervising large Canadian and international exploration programs. Mr. Scherba was an integral member of the exploration team that developed Nevsun Resources’ high grade gold, copper and zinc Bisha project in Eritrea. Mr. Scherba served as the Company’s Country and Exploration Manager in Madagascar during its initial exploration stage, discovering both the Molo Graphite and the Green Giant Vanadium deposits.
Brent Nykoliation, Executive Vice President
Mr. Nykoliation joined the senior management team at NextSource Materials as Vice President, Corporate Development in 2007 and oversees all strategic offtakes and partnerships, and communications with analysts, sell side and buy side institutional investors for the Company. He brings over 20 years of management experience, having held senior marketing and strategic development positions with several Fortune 500 corporations in Canada, notably Nestlé, Home Depot and Whirlpool. Mr. Nykoliation holds a Bachelor of Commerce with Honours degree from Queen’s University.

Commissioning our mine in Q3 2022, offtake secured with thyssenkrupp GmbH and major Japanese anode processor supplying the Toyota and Tesla supply chain.

1. We will be the next graphite project in production and the only one this year (and likely next too)
2. Real offtakes secured (thyssenkrupp and Toyota/Tesla supply chain)
3. Will be executing our downstream, vertical integration plans with key strategic partners to be able to supply major OEMs with anode material in Q4 2023